Crying, confused and alone, baby Sara pulls herself up the bars of her cot as her caregiver leaves the room.

At just 15 months old, Sara — a pseudonym to protect her privacy — has tested positive for COVID-19.

She will spend about eight days recovering in a special isolation ward just for children.

Sara has been separated from her mum, who also has coronavirus, and is being treated in a different hospital.

This is the heartbreaking new chapter of Japan’s fight against coronavirus.

The highly transmissible Delta strain has propelled case numbers here to frightening new heights and younger people like Sara are increasingly being infected.

Because of the risk of catching the disease, nurses at St Marianna Hospital in Kanagawa prefecture have to feed and change the nappies of the children in this ward as quickly as possible.

It goes against every instinct they have.

“I learned to care for patients at their bedside as much as possible, but in this case, it’s the opposite,” nurse Megumi Harada said.

“We’re basically told [to] try not to touch or get close to the patients to protect ourselves.”

Inside the paediatric COVID ward

They call it the red zone: The ward just for COVID-positive babies and children. The door leading to the red zone is decorated with beloved children’s character Anpanman and his foe Baikinman, a demonic germ.

It’s a constant reminder of the risk everyone faces heading through these doors.

These nurses are doing what they can, connecting parents and kids with tablets and video chats so they don’t feel as isolated.

But with other sick kids in the ward, there’s a limit to how long the staff can spend with each patient. “They start to feel very stressed,” the nurse said.

“We put down a play mat on the floor and play with them even for a short time.”

The kids, who now only see caregivers in full PPE, often try to embrace them or pull their masks down to see their faces.

“They give us hugs as they feel lonely,” Paediatrician Yukitsugu Nakamura said.

“They try to pull off the protective equipment because they don’t understand the meaning of it.”

The good news is that all of the children in here have mild symptoms like a cough and runny nose, and have all recovered quickly. 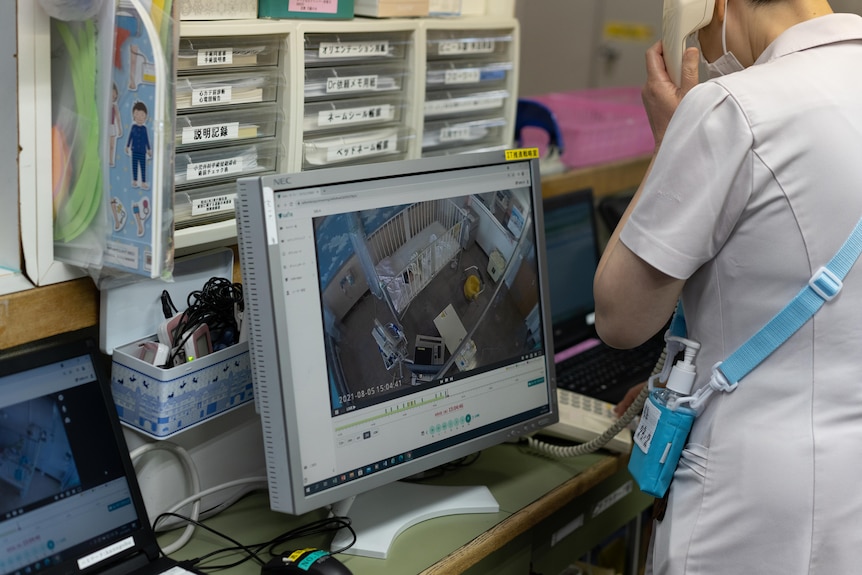 They spend on average about eight days on the ward, and by the end, they’re energetic and itching to get out.

Doctors say at times it’s felt more like a childcare centre than a COVID ward because they’re so full of beans, but can’t go home.

In most cases, their parents are also in hospital and they can’t stay with elderly grandparents because of the risk of infection.

The rising number of infections among Tokyo’s children

By far the greatest numbers of infections during Japan’s latest wave are among people between 20 and 40.

While deaths have not yet spiked, doctors are alarmed.

“Infections among people over 60s have gone down in Japan as [those] people are getting vaccinated,” Dr Nakamura said.

“But on the other hand, people in their 30s and 40s who have young children are getting infected and I think it’s spreading in homes.” In Kanagawa, the prefecture next to Tokyo, there were only five children under 10 who tested positive for COVID-19 during the first eight days of July.

And in Tokyo, infections among children have jumped by 524 per cent.

Japanese experts say the fifth wave of coronavirus here is being fuelled in part because there’s no real sense of crisis. Thousands of bars and restaurants are ignoring Government orders to close or not serve alcohol. The alternative for them is bankruptcy.

There’s no shortage of people willing to fill the seats at the bar.

But it means younger patients are increasingly showing up to hospital with moderate cases of COVID-19, requiring oxygen support as they struggle to breathe.

Hospital beds are starting to fill up.

More than 13,000 people are waiting for a hospital bed or in milder cases, a room in a medical hotel where they can be quarantined and monitored.

The Government is now asking people to stay home if possible.

Doctors fear the collapse of the medical system could be near.

If they reach a point where they are overwhelmed by COVID-19 patients, people with other illnesses will be left untreated.

“There will be an impact on the medical care for children when grown-up patients fill up all the beds,” Dr Nakamura said.

“We don’t know when this is going to end, and it makes me worry.”