AT THE START of 2016, London was calling James Skehill.

He was tempted to answer and make that move.

The previous September he’d been part of the Galway squad that fell short at the final hurdle to Kilkenny but coming that close All-Ireland glory was not a reason persuasive enough on its own for him to stay put.

Paul Carey was his employer, the owner of a building contractors company. He made his pitch so the 28-year-old would stick around.

“Only for Paul convinced me to stay, I was gone,” recalls Skehill.

“They say what’s meant for you, won’t pass you.

“A month later my mother got breast cancer. If I was over in London and my mother was sick, I was going to come home anyway. But it just transpired that Paul talked me out of going to London.

“My mother’s good now. She got over it there a year ago. She’s been very good since thankfully.”

It was not the first time that he had faced a similar dilemma as to whether he should leave home in Galway. In early 2010 as Ireland was gripped by recession, it was a tough time for a college graduate in search of steady work.

Skehill had finished up in Limerick IT and wondered what road to head down. Paul Loughnane, his lifelong friend, Cappataggle club-mate and compatriot on successful Galway underage teams, had set up base in New York. He was selling the idea to Skehill of a move.

Then the job opportunity with Carey’s company first arose. Skehill took it up, 11 years later he’s still there as a contracts manager, splitting his time between overseeing projects in Dublin and Galway.

During all that time he was able to remain committed to Galway hurling. It gave him a solid foundation. When he retired on 30 December, the personal contentment at his decision stemmed in a large way by his first-hand experience of that afternoon in 2017 when his county wiped away 29 years of hurling frustration and disappointment.

After 14 years playing with Galway I’d like to take this opportunity to announce my retirement from inter-county hurling. A huge thank you to my wife Grace, my family, friends and teammates who supported me over the years. It was a huge honour to play for my county. Thank you pic.twitter.com/j53Cl7i2Gf

“If you were retiring, you’d be in a much different position without a medal as you would be with one.

“There’s been hundreds and hundreds of fantastic Galway hurlers who unfortunately don’t have one. I’m just one of the very few fortunate people who has one, thank God. This week has really triggered the brain to look back on those days and just be thankful. 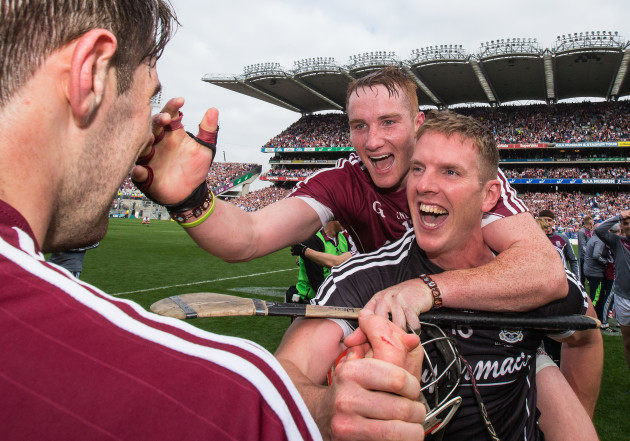 James Skehill and Conor Whelan celebrate after the 2017 final victory.

“Paul (Carey) took me on (in 2010) and kept me going on five days a week, kept me motivated, which ultimately facilitated me keeping going with Galway. He’s a big sports man. He appreciates competition and people who like to partake.

“You look at certain people who you thank during your career, he’s one of the big ones.”

A decade before he reached the senior peak, Skehill would have been forgiven for thinking such a breakthrough was inevitable. He stood in goal in September 2007 in Croke Park at the age of 19, kept a clean sheet and collected an All-Ireland U21 medal as Galway put five goals past Dublin. It was a nice addition to a minor success two years previous.

“When I looked at the team we had in Galway and the level of player we had, I certainly thought we were going to win one in the next couple of years. I never thought it’d take us ten years.

“In college I’d watch what Jackie Tyrrell was doing in the gym or Kieran Murphy. We were doing very similar stuff. As you’re doing it, you’re trying to work out what’s separating us. At that time I didn’t have the answer, whereas now I do.

“It’s just that they were a different animal back then and they had a great system in place, management structure and set of players. Everyone of them complemented each other. If the balance is right between those three, you’re going to have success and that’s what Limerick are seeing now at the minute.”

His senior career was one of fluctuating fortunes. A young debutant in 2008 under Ger Loughnane before he was locked into a battle for gametime with Colm Callanan.

“I love the team environment, love to compete and to keep fit. Every year brought a renewed focus and the fact we’ve had five managers brings its own rejuvenation. Myself and Colm had great competition. Great friends off the pitch so it was a case of just push each other to the limit and see what happens. I think we’ll both look back and say we’re pretty happy, be content with what we got.

The role of understudy was one he had to adjust to but that moment of Liam MacCarthy Cup joy was still pure even if he spent the game on the bench.

“Before we won it, I’d have said I’d have loved to be on the pitch. Now in more senior status, I understand the level of input it takes to get an All-Ireland from a team, a group and a management. It takes 50 people to win an All-Ireland, believe you me. It doesn’t take 15 or 20, one doesn’t win without the other.

“Obviously don’t get me wrong, it would have been a couple per cent better to be on the field of play but the fact that all the years of training, the losses, the injuries, all the negativity surrounding Galway, that was all wiped out when we won it in ’17.”

He had his moments in All-Ireland finals, even if they did not go to plan. Luck deserted him. He wrecked his shoulder in training on the Friday night before the 2012 final replay, started against Kilkenny and withdrew in pain at half-time.

In 2018 he flew out of the Hill 16 goal, a brave block to deny Limerick’s Seamus Flanagan was rewarded with an impact that left him dazed and unable to go on in that second half. 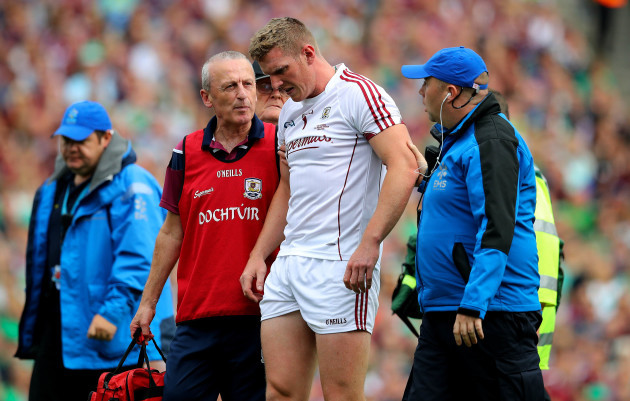 Skehill forced off injured during the 2018 All-Ireland final.

Throw in another Croke Park injury tale for good measure. In November 2008 he boomed over a long-range free to win a Connacht intermediate final for his club. But the following January he dislocated his shoulder playing for LIT, a setback that ruled him out of their subsequent All-Ireland campaign and the final where they lost to Cork side Blarney.

“It’s an unenviable record. I doubt there’s a goalie put off in two All-Ireland finals injured since. These things happen. In that time there’s f-all I can do about them.

“People were asking me, ‘Do I regret that?’

“How do I regret it? Sure the body just gave up on me momentarily.

“It happens numerous sportspeople. You just take it and move on.”

Through his years, he got plenty exposure to some of the most fearsome inter-county attackers in the country.

“The forward that sticks out in my head is Lar Corbett. Very hard to direct a defence around him. Coming through on goal you could not read his body position, which side he was going to go. It was guesswork. His movement was second to none. He was awesome.

“Look you also have TJ Reid, Henry Shefflin, Richie Hogan were fantastic. Eoin Kelly from Tipperary as well, Eoin Kelly from Waterford, Dan Shanahan. Then go back to Joe Deane in 2008, he gave us an exibition against us. I played against a lot of great guys.”

Skehill always kept looking ahead. After summer in Boston in 2014, he came back refreshed and captained Galway to win the All-Ireland intermediate title in 2015.

Since then he has been part of a Cappataggle side established in the senior ranks. They have had a heartbreaking run of four successive championship semi-final losses yet Skehill takes pride in their rise from a traditional lowly base.

He savoured getting to bring elite silverware back to his home parish in the winter of 2017 but is keen to hail Damien Joyce, Galway corner-back in the 2005 final against Cork, for blazing a trail. 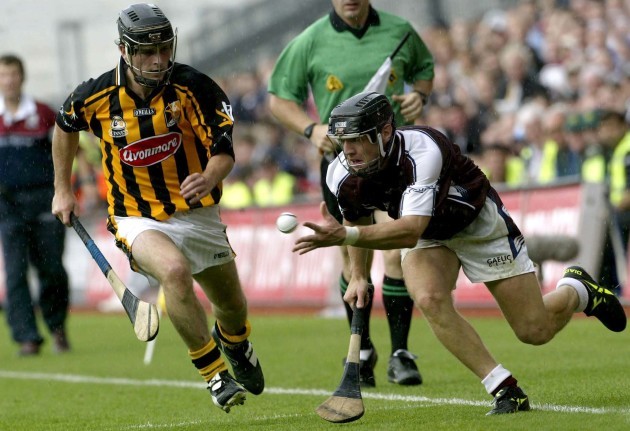 Damien Joyce in action against Kilkenny in 2005.

“He’s single-handedly probably the biggest influence on my career. He changed the ethos and the mindset of the club through his endeavours. First of all winning a Fitzgibbon down in Waterford IT and competing for the Galway minors. You’d watch how he operated. He’s a gentleman on and off the pitch. No one has a bad word to say about him. He just prepared himself to the top level. The man is turning 41 this year and he’s in the most pristine condition of any of our club players.”

Skehill’s last championship run with Galway ended at the semi-final stage in late November. The game was adorned by the sideline cuts Joe Canning whipped over the crossbar. The previous week Aidan Harte had cracked home the crucial goal that beat Galway. The three started out together underage, won everything up along and were still there when Skehill bowed out.

He has had more time than most to appreciate the hurling genius of Canning. 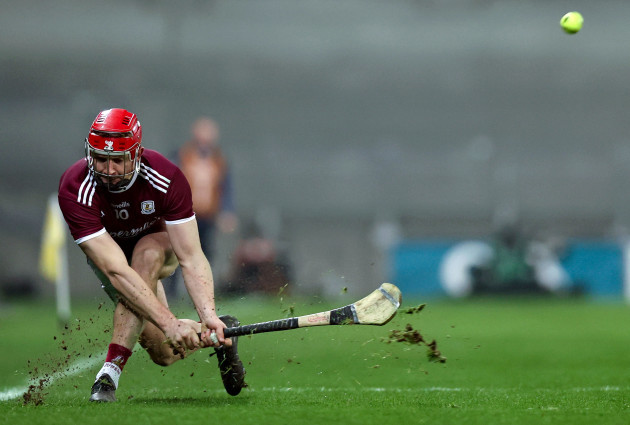 “I vividly remember, Joe and I playing against each other U14 club. We were both 13, it was down in the Portumna field. I don’t know how I remember but the same evening our club forgot the jerseys so were in a mix of t-shirts and bibs. Anyway Portumna beat us and I was like, ‘Who is this lad? Where did he come out of?’

“Then I saw him on the county team and then it really hit me when he was 15. That’s the year he took off onto a different stratosphere entirely where he was playing for his club at senior level. He absolutely bossed the U16 Arrabawn championship which we won and it graduated into him playing U21 at 17 which was unheard of at the time.

“He came on against Kilkenny in Tullamore (in 2006) and hit 2-4. You wouldn’t be surprised then if he did something magic, it just became normal. Every championship I’ve won bar the intermediate one, he’s been part of it, a huge part of it. So if we didn’t have him, I don’t know would I have what I have.”

The time has felt right to bow out, he could no longer juggle all the demands. Work is busy, he’s involved in the family farm at home and is looking forward to devoting more time to Cappataggle’s hurling fortunes. His wife Grace is expecting their second child in July.

And he’ll stay in the spotlight with his appearances on Gogglebox Ireland.

“There’s so much negativity going on nowadays around the country with Covid and Gogglebox was something myself and Grace decided to do. It’s been a good reaction around the place. We enjoy it together and each other’s company when we’re doing it. It’s just a positive show

“When I made the retirement announcement I thought it would go unnoticed but I was very surprised with the reaction. It was humbling, it was good to reminisce on certain experiences and days out. It was nice, we don’t do it often enough. I enjoyed it, I have to say.”