Sydney teacher Myron William Love has been confirmed as the Australian on board a Yeti Airlines plane that crashed during a flight from Kathmandu to Pokhara on Sunday, killing all passengers.

There were 72 people on board, in what is the country’s worst air disaster in 30 years.

The Department of Foreign Affairs and Trade (DFAT) on Monday said it was “urgently seeking to confirm the welfare of the Australian” on board. Yeti Airlines has since told the ABC there are no survivors.

A source described Mr Love and his long-term partner as “soulmates” and said the situation was “devastating”.

Nepal has begun a national day of mourning as aviation authorities say they have found the voice and flight data recorders. Arnico Panday, an adviser to Nepal’s minister of home affairs, said the government had set up a panel to investigate the cause of the disaster.

“There is a large public fear that this will end up as a report on the shelf somewhere, as happened after previous crashes,” he said.

“And our strong stance in our party, and the minister himself, is that’s not enough. We have to make sure that such crashes don’t happen again.”

The passengers represented a number of nationalities, with the country’s civil aviation authority confirming them as: 53 Nepalese, five Indians, four Russians, two Koreans, one Australian, one Argentinian, one Irish and one French.

In Nepal, distraught families gathered at Kathmandu airport for information on the plane, that went down during a 27-minute flight, crashing about 10:50am local time.

An airport spokesperson said the twin-engine ATR 72 was “cruising at 12,500 feet and was on a normal descent”. The weather on the day was also clear.

Videos posted to social media showed the plane flying low before sharply rolling in the air and disappearing out of frame.

One local captured the plane’s descent on his iPhone. Diwas Bohora said he was sitting on his terrace when he noticed the plane approaching the airport at a low altitude.

Footage shows the plane descending and crashing into a nearby ravine. Helicopters and emergency services including the army, firefighters and the Himalayan Rescue Association were immediately sent to the crash site to commence the search and rescue operation.

Rescue workers had to rappel down a 300-metre gorge to search for bodies after the plane split into pieces. 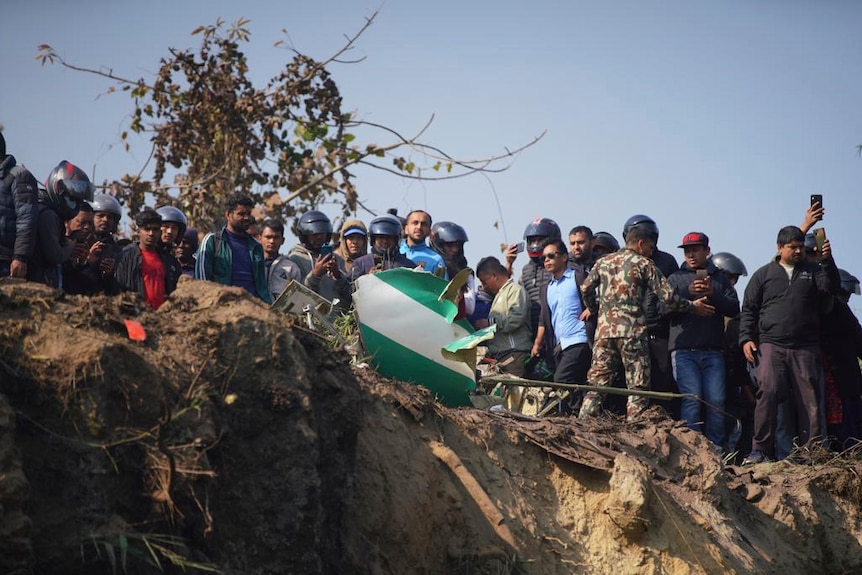 Tasmanian RSL to remove all…

Everything you need to know…

Live: Chris Hipkins to be…