Latest News
Home /The COVID-19 ‘vaccine passport’ is coming. Here’s how it could work and how it’s legal – ABC News

Health authorities are currently pleading with Australians to get vaccinated if they can.

But at some point later this year, once vaccines have been widely available for some time, that approach is expected to shift.

Rather than just asking Australians to get a COVID-19 vaccine, governments will start treating the vaccinated differently to the unvaccinated in an effort to make being part of the first cohort much more attractive.

The Prime Minister argues it is a commonsense approach — that those who pose less of a risk to others be allowed to undertake riskier behaviour.

The shift is due to occur when parts of the country move to phase b. That is when both the Australian population reaches 70 per cent fully vaccinated, and a state wanting to move forward hits the same threshold.

It is still months off. But it will be a significant shift once it comes.

So what’s being proposed?

At this point, not very much.

“If you get vaccinated, there will be special rules that’ll apply to you,” he said.

The Tasmanian, Victorian and the Northern Territory governments are working together on ideas for how the vaccinated could be carved out of COVID restrictions, and will bring them to National Cabinet at some point in the weeks ahead.

But plenty of ideas are already being thrown around. One suggestion is the fully vaccinated could be made exempt from state border closures or lockdowns.

Or businesses might be given the all clear to remain open during lockdowns, but only for the fully vaccinated.

“Vaccine passports” are already in development for international travel, but their use for domestic travel is a contentious idea within the federal government.

Plenty of people inside and outside government have ideas on how the world could be opened up to the vaccinated, and leave the unvaccinated behind.

One of the most likely changes is the end of hotel quarantine for the fully vaccinated arriving into Australia from abroad. While those who have not got the jab will still be confined to a hotel room for two weeks, the vaccinated will be permitted to quarantine at home. South Australia is about to trial a home-quarantine strategy.

And on travel, Qantas has made clear it will require passengers on international flights to be vaccinated once quarantine-free international travel eventually returns.

Lockdowns are obviously devastating for industries such as hospitality, but restaurants, bars and cafes might be allowed to keep their doors open for the vaccinated.

Innes Willox from the Australian Industry Group said businesses were keen for any shift away from lockdowns, even if that meant they could only work with vaccinated customers.

“It’s very important from a range of perspectives that we try to find a new strategy,” he said.

“Obviously, vaccination is going to be a key part of that strategy.

“And then, how we treat differently those that have been vaccinated or not vaccinated, that’s the next step in the equation.”

And if you want to head to the footy next year, you might need to prove you’ve had your jabs.

Venues NSW, which manage the Sydney Cricket Ground, Sydney Football Stadium, Olympic Park and other stadiums, has suggested anyone going to events such as rugby league fixtures will be required to demonstrate their vaccination status. Hang on, is that legal?

The pandemic has provided a striking demonstration of just how powerful some legislation is in overruling rights plenty of people have taken for granted.

In a public health crisis, governments can force people to stay onshore, to stay home and to avoid their friends and family under threat of heavy penalties.

And while mandatory vaccination has been explicitly ruled out many times, legal experts say governments can certainly make life difficult for the unvaccinated if they want to.

Associate professor Ron Levy from the Australian National University, who specialises in constitutional law, said any legal challenge to restricting the unvaccinated would face an uphill battle in the courts.

“There isn’t too much that can be done, constitutionally speaking,” he said.

He said the High Court would likely be averse to preventing governments acting on public health matters.

“It’s practical, it’s pragmatic, it’s about balancing, and this is true not just during COVID but for decades now,” he said.

“The court doesn’t necessarily want to tie the hands of governments in addressing social problems of various kinds.

“And so in Australia in particular — this is quite different from other countries — our High Court has tended to give governments a free rein.”

President of the NSW Council for Civil Liberties, Pauline Wright, said it was pretty clear cut: Australia’s powerful health and biosecurity laws gave governments the right to do this sort of thing.

“At both state level and federal level, it is legal for the government to impose restrictions on people in times of health emergency,” she said.

“So if a declaration is made, that there is a health emergency, then health orders are able to be declared.

“And we as citizens have to comply with that.”

Is Australia on its own here?

France has a “vaccine passport” that people must produce to access a whole range of places such as sports venues, cinemas, museums, nightclubs and festivals.

President Emmanuel Macron wants to eventually extend it much further, including to all restaurants, and the passport is set to cover some public transport too, such as intercity trains. The passport has sparked protests over recent weeks.

In the United States, President Joe Biden has much less power to restrict freedoms, but he is using the levers he has available.

He has required federal government employees to either sign forms attesting that they have been vaccinated, or face a whole range of new rules.

They rules include wearing masks, having weekly tests, social distancing and being banned from travel for work.

And from the end of September, England will start to require proof of vaccination to enter some high-risk spots.

Nightclubs are a certainty, and other places where large crowds get together may also be included.

What if you can’t get jabbed?

The policy aims to make life difficult for those resisting getting vaccinated in an effort to get inoculation rates up as high as possible, as quickly as possible.

But there are, of course, some who cannot get vaccinated for medical reasons.

Labor senator Malarndirri McCarthy has aired concerns about creating “two classes of Australians” and excluding those for whom vaccination just is not an option.

“Where I have expressed concern around restrictions for unvaccinated people is regarding the small percentage of the population who are medically unable to get the vaccine,” she said.

“I would not want to see vulnerable Australians excluded from society.”

Work is underway to figure out how to ensure those who genuinely cannot get the vaccine are not subjected to undue restrictions through no choice of their own.

Exemptions could possibly look like those already in place under the “no jab, no pay” childcare policy, which sees childcare subsidies withheld from parents who do not vaccinate their young children.

Under that policy, medical exemptions are granted to those who have had anaphylactic reactions to vaccines, are significantly immunocompromised, or have natural immunity.

“If people do have genuine, religious or cultural reasons for not being vaccinated, then they shouldn’t be restricted as a result of that,” she said.

“As long as they can show that they’ve been tested and they are free of COVID-19.

“Because that’s the other answer to it … either you’ve been vaccinated, or you can prove that you’ve been tested and you’re COVID negative.”

And what about those who just won’t get jabbed?

There are some mounting the argument that vaccination is a choice, not a requirement, and the unvaccinated should not be denied freedoms handed to others.

Liberal senator Eric Abetz (who is soon to get his second dose) is among them, arguing that once vaccines are widely available, restrictions should be eased for everyone — vaccinated or otherwise.

“Once 100 per cent of the population has had the opportunity to be fully vaccinated, lockdowns and all restrictions should be a thing of the past and vaccine passports should not be a blunt instrument to force people to be vaccinated by locking them out of society,” he said.

“Denied or limited access to government and private business goods and services should not be based on one’s medical status, and the idea of a domestic ‘vaccine passport’ is a dangerous one that can create a class of citizens.”

Ms Wright said people should have the freedom to choose not to get vaccinated, but others were equally entitled to their health and freedom.

“If you haven’t been vaccinated … there are people in the community who have every right to say to you, ‘I have to protect my staff in terms of occupational health and safety.'” 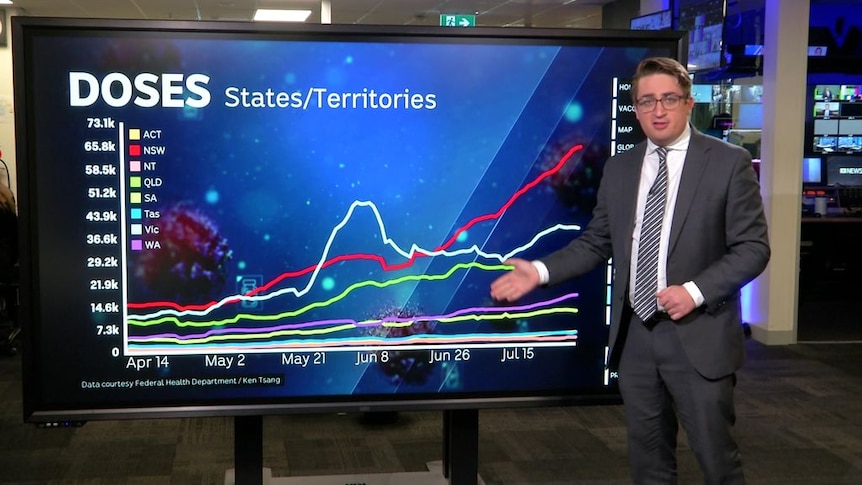